New research has shown that whilst young women are aware of the availability of careers in technology, half hold a belief that they are ‘unexciting’ and more than two-thirds think that roles in tech are predominately linked to gaming and IT consultancy; according to research commissioned by leading luxury fashion e-commerce group YOOX NET-A-PORTER GROUP (YNAP) as part of their work to support digital education.

Outside of these sectors young women associate technology careers with engineering, architecture, telecommunications and even finance; with more creative industries such as retail, luxury, travel, fashion and beauty all coming bottom of the list in terms of their relationship with technology roles. Conversely, the majority of young men believe tech careers to be ‘exciting’ and have a more open approach towards STEM or ICT related subjects. 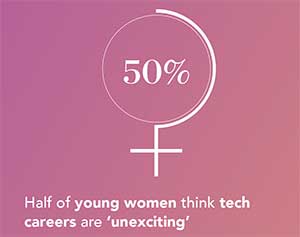 Despite its intrinsic link to apps, social and online platforms, only 8% of young women think that technology careers have a role to play in fashion, only 7% associate it with retail and just 5% think tech has a place in luxury. This is similar amongst young men, but interestingly, they have a slightly broader view of the roles involved.

The new research, which surveyed 1,000 young people aged 11 to 16 years old and 1,000 parents of the same aged children, is part of YNAP’s ongoing work to support young women to further their digital education. The news follows a series of events powered by YNAP to encourage young people – especially young women – to consider careers in technology including a hackathon hosted at the company’s West London Tech Hub where dozens of school children used coding to explore what tech careers could look like through a fashion lens, as part of its Imperial CodeLab initiative.

The partnership between YNAP and Imperial College London helps young people to learn about tech through the lens of fashion. It is therefore encouraging to find that almost 40% of young women who took part in the research said that they would be further motivated to study tech-related subjects at school, including science and maths, if they knew it could lead to careers in the fashion industry.

It’s common to think of someone working in isolation, writing line-after-line of code when we think about careers in tech, but this couldn’t be further from the truth. Today, tech is a creative and flexible discipline, where consumer products and experiences are designed in a collaborative environment. This is especially true of tech and fashion, which together offer a wealth of opportunity which can only increase as these two industries continue to converge through e-commerce.

We’re proud to be ahead of the curve with women forming two thirds of our overall talent pool – double that of the tech industry average – but there is more work to be done. The key to changing the misperceptions highlighted in our research is for leading businesses like YNAP, our peers, industry bodies and key influencers to collaboratively shine a spotlight onto positive role models. This is especially true in terms of misperceptions amongst young women who are more likely to consider a career in tech less exciting than their male counterparts.

To begin changing the perceptions that young women have about careers in technology, it is crucial to bring them to life in a way that is relevant, memorable and immersive. Telling girls these careers are fantastic is not enough, they need to be immersed in it and have the opportunity to interact with aspirational individuals who are doing the job, and can speak passionately about its benefits. The engaging nature of the YNAP Imperial CodeLab is what made it such a roaring success amongst the pupils in our school. 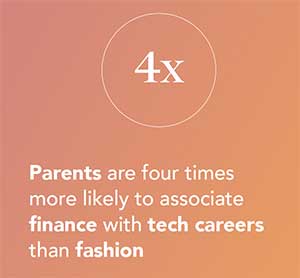 Young people aged 11 to 16 in the UK who took part in the study also said that their career choices and inspiration are influenced by their parents first, followed by teachers, the internet, friends and then TV shows and social media.

The research showed evidence of this link, with parental views of technology careers reflecting those of the young people, highlighting the opportunity for creative, retail and fashion businesses to share greater knowledge and understanding of how studying coding as well as STEM and ICT subjects can lead to exciting careers in these businesses with both school students and their parents.

Parents are four times more likely to associate the world of finance with tech careers than they are to think about fashion; although consumers interact with the finance industry in a very similar way to fashion…through apps and online platforms.

Equally, less than 5% of parents in the UK associate the fashion industry with a successful career in tech, believing instead that tech roles are primarily for gamers and IT consultants. However, it is encouraging to see that this issue is purely around awareness, as the research found that 36% of parents would encourage their children to study tech-related subjects if they knew it would lead to career in fashion.

It’s natural that the views of parents are likely to be passed down to young people and we can see it in our research. Mirroring the views of adults, outside of gaming, telecommunications and web design, young people aged 11 to 16 associate tech with engineering, architecture and finance – with only 5% thinking it has a role to play in the world of fashion.

This is why initiatives like the YNAP Imperial CodeLab are so important to us. The partnership brings to life the opportunities that learning skills like coding can bring, all through creative classes and interactive, engaging content.

Girls decide very young that going into computing is not for them. Through Imperial CodeLab and our partnership with YNAP, we hope to break down barriers and excite girls about careers in tech. By providing them with positive role models and equipping them with skills in problem-solving, creativity and computational thinking, we hope to inspire a diverse next generation of tech innovators.

In the UK, YNAP continues to proactively attract the next generation of digital artisans through initiatives like the Imperial Codelab, Women in Tech and an investment in its West London Tech Hub. The Tech Hub’s first anniversary was honoured just last month with a visit from HRH The Prince of Wales and HRH The Duchess of Cornwall during which they met schoolgirls from the local area participating in a YNAP Imperial CodeLab hackathon.

Over 2000 students have participated in digital education activities led by YNAP since 2017, with girls making up more than half of those taking part.